Book Presentation: “The Road to Home: My Life and Times”

Book Presentation: “The Road to Home: My Life and Times”

Date: November 21, 2008
On November 21, 2008 CRRC-Armenia jointly with RA National Academy of Sciences held a presentation of an autobiography book by Vartan Gregorian “The Road to Home: My Life and Times” recently published in Russian. In the book, Vartan Gregorian, who is currently the twelfth president of Carnegie Corporation of New York, describes his life, family, and academic career since his childhood in poor section of Tabriz, Iran.
The book was presented by RA NAS President, academician Radik Martirosyan, who, knowing the author, was able to share his personal memories. Nerses Hayrapetyan, the Director at Information Resource Center, U.S. Embassy Yerevan, Public Affairs Office, also shared his memories of Mr. Gregorian, whom he first came to know in 2002 when Mr. Gregorian visited the National Library of Armenia and made the biggest donation to the library from his own pocket. 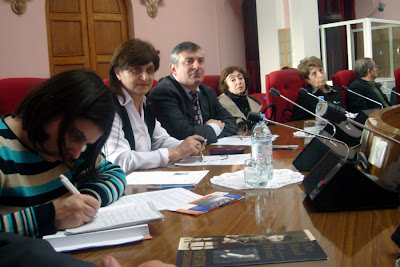 The event took place at the Conference Hall at NAS, and it was attended by librarians, academicians and faculty. Copies of the books were donated to the major libraries, such as the National Library, the Library of the National Assembly, Yerevan State University Library, the Library of NAS, and Writers’ Union of Armenia.
Category Blog
Tags presentation Carnegie Corporation books