In this post, four sets of survey question responses from the Caucasus Barometer for Armenia (2011, 2015) are analyzed and compared: (1) Ideal number of children per family; (2) Preferred gender of the child; (3) Having an abortion – Always justified or never justified; (4) Getting a divorce – Always justified or never justified. These four sets of questions are operationalized to represent “family values,” which for the purpose of this post, refers to attitudes and practices surrounding the maintenance of the “traditional” nuclear family unit (a husband and wife and their child(ren)).
Comparison of 2011 and 2015 responses to these questions reveals that while negative attitudes toward divorce and abortion are slowly declining, a significant number of respondents still hold negative or ambivalent views of these practices. In terms of attitudes toward children, it appears that the ideal number of children per family is increasing, with 76% of respondents in 2015 indicating that the ideal number of children is 3 or more (Figure 2.1). This ideal does not align with Armenia’s total fertility rate, which was 1.36 children/woman in 2009, and 1.64 children/woman in 2017.
Related to these issues is boy preference and sex-selective abortions, interconnected phenomena which continue to impact Armenian society. Underlying this entire post is what the United Nations Population Fund refers to as “patriarchal and ‘traditional’ rigid social norms and perceptions” in Armenia, surrounding such issues as masculinity, femininity, sexuality, gender equality, and relationships within families. 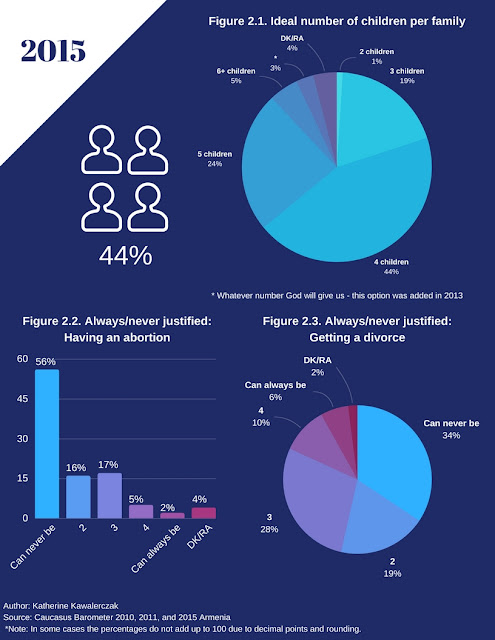 Preferred Gender of the Child
According to a United Nations Population Fund (UNFPA) report, Armenia has one of the world’s highest gender imbalances at birth: in 2013, 114 boys were born for every 100 girls in Armenia (compared to the natural ratio of 104-6 boys for every 100 girls). This trend has been attributed to both cultural preference for boys and advancements in ultrasound technology, resulting in a high demand for sex-selective abortions.[1] Despite new legislation illegalizing sex-selective abortions and campaigns geared at educating the public about the negative consequences of sex imbalances, on both society and the status of girls and women within it, boy preference remains a serious issue facing Armenian society.
In 2010, the Caucasus Barometer for Armenia posed the following question: “If a family has one child, what would be the preferred gender of the child?”[2] 54% of respondents indicated that they would prefer a boy, 35% said it did not matter, and 10% indicated a girl (Figure 1.2). Culturally, boys are preferred in Armenia, and in other countries with high sex ratios at birth, because they preserve the bloodline and family name, and are expected to care for their parents in their old age; in contrast, girls are expected to join the household of their husband’s family.
During the Soviet period, the issue of boy preference was solved through large family sizes: couples would keep having children until the desired son and heir arrived. Indeed, Armenia had one of the highest fertility rates in the Soviet Union, with an average of more than four children per woman in the 1960s.[3] The fertility rate has fallen drastically since this time, in large part due to the economic, political and social instability wrought by the breakup of the Soviet Union, the war with Azerbaijan, and the 1988 earthquake. In 1990, the fertility rate was 2.6 children per mother.[4] The current fertility rate (2017 est.) is 1.64 children per woman.[5]
If the economic situation in Armenia is such that most couples cannot have large families, the sex of their first, second, and/or third child becomes much more important. For couples desperate to have a son, prenatal ultrasound screening and sex selective abortions were considered viable options until recently. Now that sex selective abortions are illegal in Armenia, and perhaps in part due to public awareness campaigns, the sex ratio at birth is declining: in the beginning of 2017, 111 boys were born for every 100 girls (compared to 114/100 in 2013).[6] It remains to be seen if a cultural preference for boys can truly be eradicated, however. Many activists within Armenia believe that the key to overcoming the practice of sex selective abortions is “changing the value of the girl, and women’s equal status in [Armenian] society.”[7]

While the total fertility rate in Armenia is currently 1.64 children per woman (2017 est.), the 2011 and 2015 Caucasus Barometer data shows that the ideal number of children per family is high, and continues to increase. In 2011, 3% of respondents believed one child was ideal, 28% said two children, 38% said three children, 21% said four children, 8% said five or more children, while 1% indicated that they did not know or would rather not respond (Figure 1.1). Three children was considered to be ideal by the largest percentage of respondents. The second most popular choice was two children.
In the 2015 Caucasus Barometer, two new response options were added: “six or more children” and “whatever God will give us.” The data shows that the percentage of respondents who believe three or more children is ideal is increasing: 1% said one child was ideal, 19% said two children, 44% said three children, 24% said four children, 5% said five children, 3% said six or more children, 2% said whatever God will give them, and 2% did not know or did not wish to respond (Figure 2.1). While three children remains the most popular choice, as in 2011, the percentage of respondents who chose this option in 2015 increased by 6%. The second most popular option in 2015 was four children (24%), versus two children in 2011 (28%).
The possible explanations as to why some individuals desire large families but may not go on to have them are numerous: economic instability or precariousness; disagreement between couple about how many children is ideal; deciding to stop having children after a son is born; living in an environment which favors small families (urban versus rural); and others. While it is beyond the scope of this post, the Caucasus Barometer data can be further segregated to reveal which factors impact the desire for larger versus smaller families (i.e. urban versus rural residence, religiosity, gender, income level, age). For instance, statistics have shown that Armenian families with four or more children are far more likely to live in poverty than families with fewer children.[8]

Induced abortions are legal in Armenia, and for many years, abortions were one of the most common methods of birth control in the country.[9] However, data from the Caucasus Barometer indicates that the practice is viewed extremely negatively in Armenia. In 2011, the majority of respondents, 71%, said that abortion can never be justified (Figure 1.3). In 2015, that figure decreased significantly, to 56% (Figure 2.2). However, that still leaves over half of respondents who are staunchly opposed to the practice, regardless of mitigating factors.
According to UNFPA, over 40% of Armenian women have had at least one abortion (2017 est.). One proposed explanation behind this relatively high rate is that affordable contraceptives are not widely available, and many people believe them to be harmful.[10] A 2016 UNFPA survey found that 67.8% of respondents believed that contraceptives had bad side effects for women, while 40.4% believed it is morally wrong to use contraceptives. At the same time, 78.8% of respondents believed that intimate partners should use a form of contraception if they are not ready to have a child.[11]
This disinformation or ambivalence toward other methods of contraception, including condoms, coupled with the practice of prenatal ultrasound screening for sex and subsequent sex selective abortions, may factor into Armenia’s total abortion rate. As for negative views of abortions, other factors must be investigated, including overall levels of self-assessed religiosity and cultural and/or social expectations and pressures in favor of large families.

According to the 2011 Caucasus Barometer for Armenia, the majority of respondents, 56%, indicated that divorce can never be justified, 3% believed that it could always be justified, and 37% fell somewhere in between these two extremes (Figure 1.4). In 2015, those numbers changed significantly: only 34% believed that divorce could never be justified, 6% believed it could always be justified, and 57% fell somewhere in between (Figure 2.3). This change might indicate that traditionally rigid attitudes toward marriage – that the union must be upheld regardless of incompatibility, intimate violence, or other factors – are slowly changing in Armenia. The heated public debates surrounding violence against women and girls, and the resulting legislation criminalizing domestic violence, may likewise be a reflection of a broader trend in Armenian society toward greater gender equality.[12]
That being said, there remains a strong, conservative voice in Armenia advocating against these developments, claiming that they run counter to “traditional Armenian values” and serve to undermine the fabric of Armenian society, the patriarchal family unit.[13] The idea of a clash between the traditional “Eurasian Family” and a “Western agenda” of greater rights for women and LGBTQ individuals which will inevitably lead to moral and demographic decline holds significant sway in Armenia, and is connected with Russian soft power influence.[14] Whether this “anti-genderism” will continue to impact attitudes and practices within Armenia, including those related to marriage and family planning, remains to be seen.