Date: February 11, 2011
Already for the fourth time the European Bank for Reconstruction and Development and the World Bank initiated the Business Environment and Enterprise Performance Survey (BEEPS). The purpose of this survey is to collect data about the business environment and corruption. In 2008 11000 interviews were conducted with different firms compared to 9637 firms in 2005.
The questionnaire and the sampling methodology have been changed compared to 2005. In 2008 stratified random sampling was used instead of simple random sampling. In 2008 firms included in the sampling had 5-10000 employees, were not 100% state owned and had been operating for three years or more.
During the latest 2008 survey 374 firms were surveyed in Armenia (351 in 2005), 380 firms in Azerbaijan (350 in 2005), and 373 firms in Georgia (200 in 2005).
The results show, that administrative corruption has declined in 2008 compared to 2005, however countries of the former Soviet Union as a group have not made significant improvement.

As it is seen from the figure below, the frequency of bribe has risen in Armenia since 2005, in Azerbaijan it has slightly declined and in Georgia it is significantly low, on the same level with Eastern European countries. 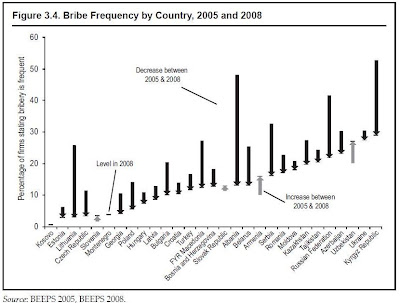 In 2008 around 65% of the firms in Armenia said that courts, access to lands, and business licensing are not a problem, while in 2005 42%, 39% and 32% consequently said so. In this regard, Azerbaijan has substantially improved results for tax administration from 2005 (38% vs. 10%), and customs and trade regulations (58% vs. 32%).
Both in Azerbaijan and Georgia bribe frequencies have declined with 7% and 6% consequently, while in Armenia it has increased from 10% to 16%. In Azerbaijan in 2008 bribe frequency was 23% and in Georgia only 4%, thus much lower than the mean value for bribe frequency for European countries surveyed – 13%.
Unofficial payments for securing government contracts are high in all South Caucasus Republics, as well as in other countries studied, on average 20-21%. 16% of firms in Armenia, 13% in Azerbaijan and only 3% in Georgia said bribery is frequent in dealing with taxes.
In terms of employees with university or higher degree, Armenian companies are the pioneers. Thus, 55% of employees in Armenia have university degree or higher (in Azerbaijan 31%, in Georgia 46%). Worth to note, that in 2005 it was only 22% in Armenia, 43% in Azerbaijan, and 57% in Georgia.
Armenian firms are also pioneer in spending funds on research. Thus, 24% of firms surveyed in Armenia during 2008 have spent funds on research and development during past three years (in Azerbaijan 7%, in Georgia 16%). The top three problems for doing business in Armenia are tax rates (72%), access to finance (59%), and corruption (52%); in Azerbaijan – corruption (66%), tax rates (65%), and access to land (61%); in Georgia – electricity (65%), access to finance (55%), and tax rates (51%).
On average, tax administration and corruption are common problems in the countries of former Soviet Union and Eastern and Central Asian countries.
Hopefully during the next survey we will witness substantial improvements not only in South Caucasus countries, also in all other countries surveyed. As for South Caucasus Republics, Armenia and Azerbaijan can benefit from studying the experience in Georgia, especially in fighting corruption and tax administration.