On July 31, 2013, Caucasus Research Resource Centers (CRRC) – Armenia invited CRRC Senior Fellow Tatevik Zohrabyan to present her research on factors impacting Female Labor Force Participation (FLFP), including findings related to the factors which influence female attitudes toward having a job in case of job scarcity in the South Caucasus. The study was implemented within the framework of CRRC-Armenia Fellowship Program and is based on an analysis of the Caucasus Barometer household survey data for 2010, conducted by the CRRC regional offices.

Dr. Tatevik Zohrabyan is a graduate of Texas A&M University and holds a PhD in Agricultural Economics. Tatevik worked on cross–border mergers and acquisitions, company evaluations, statistical and financial modeling, thus possessing extensive experience in finance, consulting, research, and teaching. Currently she is Head of Corporate Finance and Business Advisory department at Baker Tilly Armenia.
During the seminar, the importance of the female labor force participation was elaborated upon and results from cross–tabulations revealing the current female employment patterns in the South Caucasus were discussed. On the basis of these results, Dr. Zohrabyan then presented recommendations directed toward the improvement of female labor force participation in the South Caucasus. 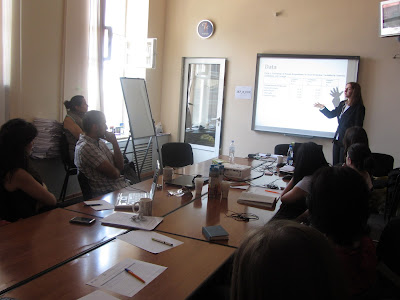 The objective of the first study was to empirically investigate factors impacting the FLFP in the South Caucasus using a binary logit model. The second study attempted to reveal socio-economic factors impacting the female attitude toward having a job in case of job scarcity in the South Caucasus through an ordered logit model analysis.
In a nutshell, the study revealed that residing in the capital was inversely related both with the FLFP in Armenia and with having more negative attitudes toward a statement that “Men have more right to a job in case of job scarcity” in Azerbaijan and Georgia. Furthermore, a negative relationship was found between age and the FLFP in Armenia, Azerbaijan, and Georgia.
It was found that in Georgia, increased age decreased the odds of having negative attitudes toward the aforementioned statement. Having at least higher education positively affected the FLFP in Armenia, Azerbaijan, and Georgia, simultaneously generating more negative attitude toward the statement.

Finally, based on the estimation results, Dr. Zohrabyan presented recommendations to attain maximum female labor force participation, such as:
· employing strategies aimed at encouraging the female labour force participation in capital cities;
·  creating jobs with flexible working hours to fit the schedule of married women;
·  implementing policy enhancing women’s self-esteem and social status that will help to break the cultural stereotype that men are more entitled to jobs when jobs are scarce;
·   investing in child care facilities and making them affordable to women. 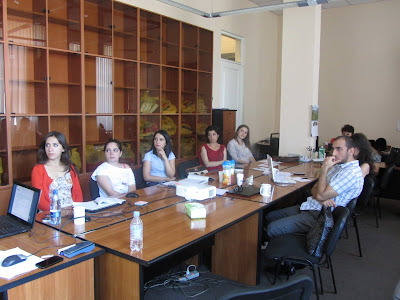 Among the attendees were representatives of civil society organizations and research institutions. This informative and important presentation was then followed up by a lively discussion and question and answer session.