Discourse of post-April events in Nagorno-Karabakh

Discourse of post-April events in Nagorno-Karabakh

The April 2016 events on the line of contact have destabilized the security situation in the Southern Caucasus. An attempt to change the status quo in the region was not successful. The mediation of Nagorno-Karabakh conflict is postponed until further initiatives from conflict actors. The regional and global geopolitical players, Russia, Turkey, EU, the USA, and Iran, present in the conflict arena are contending for dominance in the region. Have April events in Nagorno-Karabakh changed the geopolitical outlay? This question is analyzed within the CRRC-Armenia international fellowship by means of ten collected expert interviews both in Armenia and Nagorno-Karabakh.

On the regional level, heirs to the former empires step in – Russian, Ottoman, Persian. States with geopolitical and economic interests keep a diplomatic game rolling in favor of dominance. On the global level other powerful states and unions like the US and Europe step in to seek for access to the Caspian and Black Sea regions. The Nagorno-Karabakh conflict becomes a good leverage for the maneuvering of external players in the regional and global security spaces. Therefore the overall geopolitical picture of Nagorno-Karabakh is very complex.

The core arguments of the study were formed around Russian perspective on its regional dominance. The first hypothesis argued that Russia is a primary, but not the only influential player in the Southern Caucasus. Second, that Nagorno-Karabakh conflict is a battlefield between Russia and Turkey for geopolitical dominance, not between Russia and the US. The data was collected in Armenia (7 interviews) and the Nagorno-Karabakh Republic (3 interviews) from political experts and researchers, chosen on the basis of active and continuous research in the field.

According to the findings based on interviews, Russia is a primary major player today, but not the only one. Turkey together with the USA are balancing Russia in the region. Respondents were asked to state what country, in their opinion, is dominating in Nagorno-Karabakh.
The second hypothesis, which is Nagorno-Karabakh conflict is a battlefield between Russia and Turkey for geopolitical dominance, but not between Russia and the West was confirmed as well. Nagorno-Karabakh conflict is the only stage where Russia and the USA agree on action steps and have constructive dialogue.

Several case scenarios were revealed on the basis of interviewees’ responses. A part of the questionnaire was focused on current status quo in the Southern Caucasus region and a change of the situation. Further questions helped assess the current mood towards conflict development in the Armenian society: What has got to happen for the present status quo to change? Which confrontation is ongoing in the Nagorno-Karabakh: Turkey vs. Russia or the West vs. Russia? Is Russia considered as the only player, if not, who are other players? With the inefficiency of international organizations like the OSCE and the UN and peace talks what outcomes/developments can we see in the region? Based on responses from interviewees and content analysis of phrases “increase of conflict”, “escalation”, “conflict resolution”, “external measures”, “war”, and “peace” author compiled elements of three possible case scenarios of the situation around Nagorno-Karabakh. The ultimate case scenario majority of respondents expressed was case-scenario B with elements of case-scenario C.

The April events, a four-day war, have not changed the geopolitical outlay on the whole. Russia remains a major player in the region who seeks to keep the status quo. Moreover, Russia is involved very much in peace process between Azerbaijan and the Nagorno-Karabakh Republic represented by Armenia, which has not been reached so far. Turkey steps into the game for regional dominance, unlike the USA, and sparks rivalry with Russia. Experts agreed on the possible case scenario for Nagorno-Karabakh, excluding potential conflict resolution in the near future. 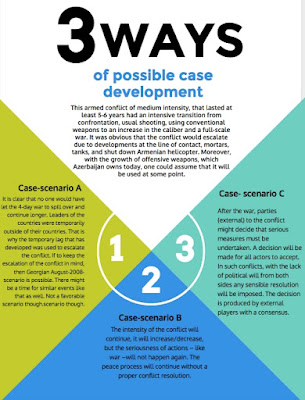 The content of this blog is the sole responsibility of the author and does not necessarily reflect the views of CRRC-Armenia.
Category Blog
Tags International Fellow Armenia conflict geopolitics Nagorno-Karabakh security eu CRRC-Armenia Russia south caucasus Turkey USA