Does education make a difference in attitude towards homosexuality in Armenia?

Does education make a difference in attitude towards homosexuality in Armenia?

Theoretically, the aim of the education is not only to provide people with basic knowledge and technical skills in a particular sphere but also to shape their worldview and critical thinking. During their education, individuals are introduced to lifestyles and new ideas, interact with their peers and get acquainted with nonconformity which gradually becomes natural. Prior empirical work (Ohlanderet al., 2005; Lambertet al., 2006; Treas,2002, Loftus,2001) evidenced a positive correlation between education and tolerance towards sexual minorities. However, the case of Armenia is understudied in the literature.
Stemming from the above-mentioned  discussion, this blog post aims at revealing the relationship between education and attitude towards homosexuality in the Republic of Armenia.

The question below measures the tolerance towards homosexuality:

In sum, we evidence almost no effect of education on positive attitude towards sexual minorities in the Republic of Armenia. The explanation for this phenomenon can be fewfold. First, Armenian society is highly religious. In particular, more than 80% of the respondents accept to be religious according to the Caucasus Barometer (2015)[2]. Second, given the traditional nature of the Armenian society, family is considered as a supreme value, which may undermine the effect of education on respondents’ attitudes towards sexual minorities.
[1] “Social Attitudes towards LGBTI people in Armenia”, [2015]. “Public Information and Need of Knowledge” NGO in Armenia, in cooperation with Women’s Initiatives Supporting Group NGO from Georgia, within the frames of the project “Solidarity Network for LGBTI in Armenia and Georgia” financed by Heinrich Böll Foundation South Caucasus Regional Office, are carrying out a comprehensive study of social attitudes towards LGBTI people, including a survey carried out by CRRC-Armenia. The results of this research will be presented in July, 2016.
[2] Caucasus Barometer is a nationwide household survey with over 6,800 respondents across the South Caucasus. It runs annually in Armenia, Azerbaijan, and Georgia based on the same methodological approach and the same survey instrument. 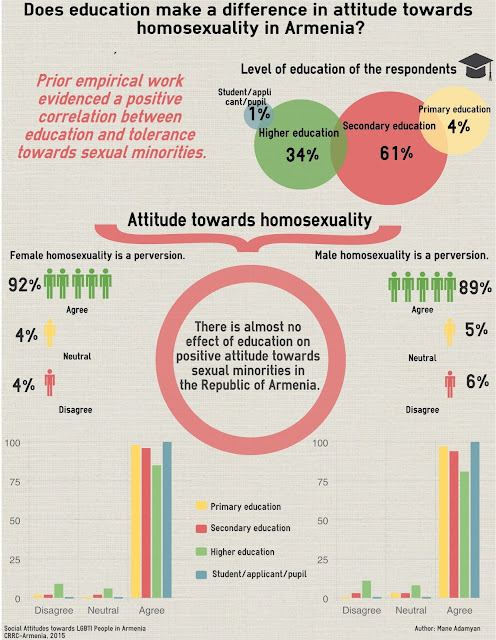