Extending the borders: CRRC-Armenia junior fellow presenting at the International Conference on “Religious Diversification Worldwide and in Central and Eastern Europe”

Extending the borders: CRRC-Armenia junior fellow presenting at the International Conference on “Religious Diversification Worldwide and in Central and Eastern Europe”

Date: July 9, 2014
By Marianna Fidanyan, CRRC Junior Fellow
CRRC-Armenia 2013 Junior Fellow Marianna Fidanyan participated in the conference with the paper about the Armenian Apostolic Church (AAC). She gave her speech during the session on diversification of church and state relations, and talked about the historical role of the AAC, the current situation, and perceptions of the church in the Republic of Armenia (RА) and in Diaspora. Marianna’s participation was kindly supported by the Ministry of Sport and Youth Affairs of the Republic of Armenia.
The Conference was organized by the International Study of Religion in Eastern and Central Europe Association (ISORECEA) in cooperation with Vytautas Magnus University and Lithuanian Society for theStudy of Religions. It took place on 24-27 April in Kaunas, Lithuania, and gathered over 90 participants.
The main purpose of the conference was to reveal the patterns of religious diversification within the Central and Eastern European (CEE) societies, with the focus on differences in approaches, adaption processes and attitudes of the states towards the changing situation. The conference had an objective of bringing together scholars from different disciplines in order to share experience and knowledge on the most foreground issues concerning the religious freedom vis-à-vis the emerging diversification processes in the region. The conference program also included the issues of religious tolerance, church and state relations, religious minorities, human rights, etc. During 18 parallel sessions, about 80 papers were presented by the scholars from 26 countries of the world.
Irena Borowik, professor of religious studies at the Jagiellonian University and co-founder of the ISORECEA, gave the first plenary speech. She mainly talked about processes transforming religious field in CEE during the last decades with focus on the changes taking place inside the religious systems and around them. The session was followed by the speech of Eileen Barker, professor emeritus of the sociology of religion at London School of Economics, devoted to the diversification among New Religious Movements, paying attention to the special characteristics that different generations of those movements have. The last plenary session mainly covered the issues of interaction between the religion, state and society in the Baltic States and was represented by Ringo Ringvee, the adviser at the religious affairs department at the Estonian Ministry of theInterior.

Ms. Fidanyan’s paper comprised of social research in addition to the extensive review of scientific literature. The most of the findings were based on 15 in-depth interviews with historians and theologians and other experts on issues in question, as well as AAC priests and representatives of minority religious organizations. Moreover, two focus group discussions with local and diaspora parish members were held in order to find out how the Diasporan Armenians perceive the AAC as compared to those from the RA. The comments made during the discussion panel, helped to further develop the paper and submit it to the Edited Collection of Essays on “Religion and Migration in the Black Sea Region”.
Furthermore, along with coauthor Arman Gasparyan, she represented the most recent findings of the study entitled “The Armenian Apostolic Church – Historical Role, Current Perceptions and Function among the Armenian Diaspora” during the presentation at CRRC-Armenia on July 2, 2014. 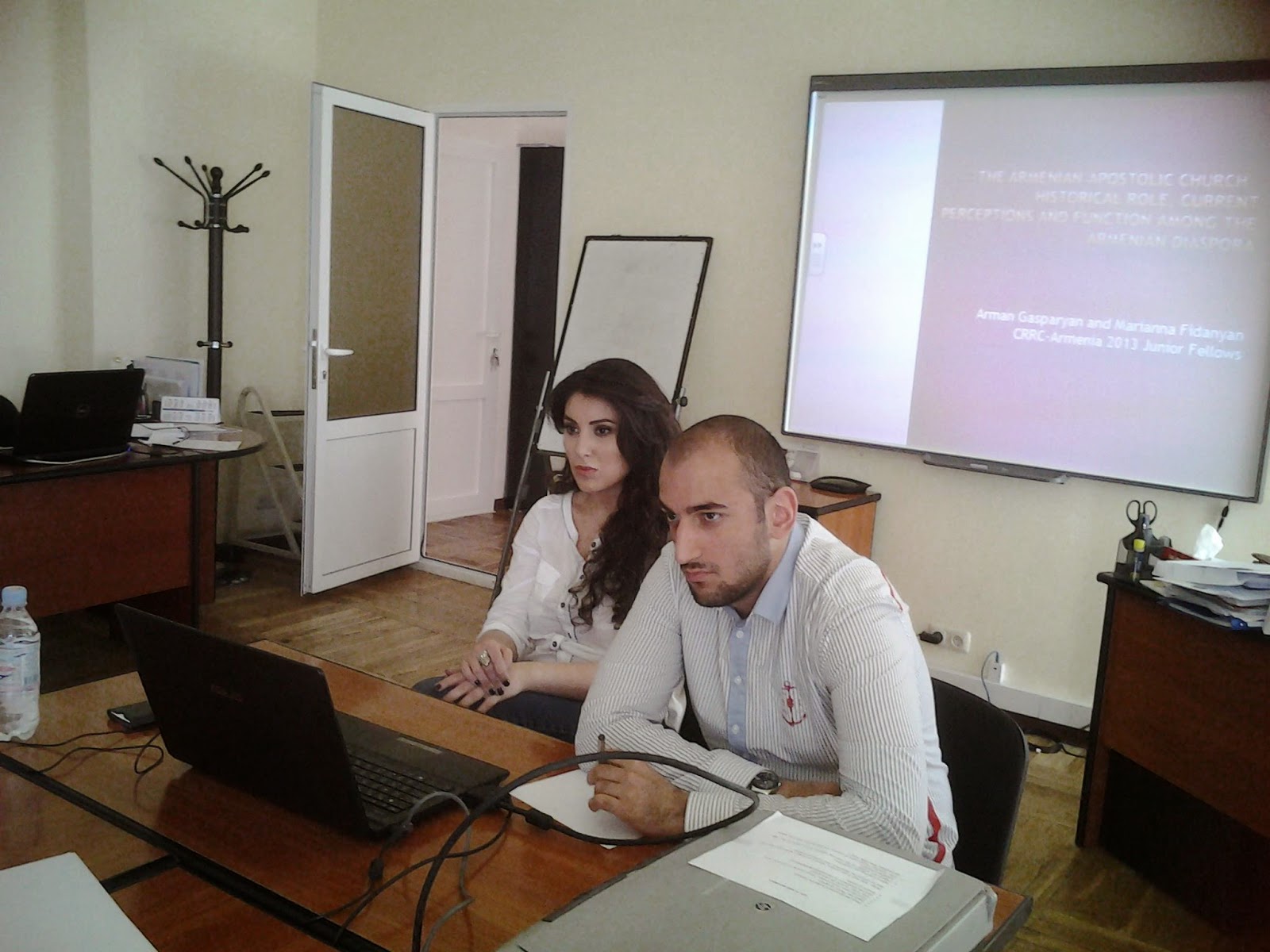