Date: May 6, 2008
On April 29, 2008 CRRC-Armenia invited a round table on Fitch Ratings and Armenia’s sovereign rating outlook during which Mr. Edward Parker, Senior Director for Russia and the CIS, Bulgaria and Slovakia in Fitch’s Sovereigns team, and Mr. Andrew Colquhoun, Director in Fitch’s Emerging Europe team, met with Armenian experts. 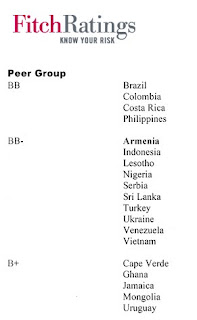 Fitch Ratings is a leading global rating agency committed to providing the world’s credit markets with independent, timely and prospective credit opinions. Built on a foundation of organic growth and strategic acquisitions, Fitch Ratings has grown rapidly during the past decade gaining market presence throughout the world and across all fixed income markets.

In 2006, Armenia received an international credit rating for the first time. Fitch assigned a lower ‘BB-‘ sovereign credit rating indicating a relatively high risk of doing business, as the economy remains vulnerable to shocks due to its high degree of dollarization, underdeveloped financial services, low value-added economic activity, as well as the Nagorno-Karabakh conflict. 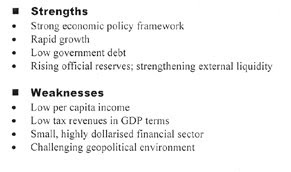 The last rating was published in May 1, 2007, when Fitch Ratings revised the Outlook on Armenia’s ‘BB-‘ IDRs to Positive.

The images illustrate how last ratings made Armenia relate to other countries in the peer group, as well as Armenia’s particular strengths and weaknesses.