Date: June 23, 2011
TESEV’s Foreign Policy Programme recently published a report entitled ‘Foreign Policy Perceptions in Turkey’, which analyses Turkish attitudes towards international relations with several countries, including Armenia. The main finding of their survey regarding attitudes towards Armenia is that Turks are more supportive of undergoing various kinds of rapprochement with Armenia than they are of fully re-establishing diplomatic relations and opening the border. 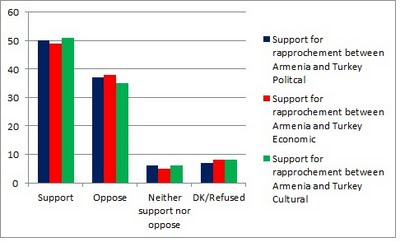 Turkish perspectives on re-establishing diplomatic relations and rapprochement vary greatly depending on region. The greatest level of support for re-establishing diplomatic relations with Armenia comes from those residing in South East Anatolia, with 59% of respondents expressing their support. The most opposition comes from those residing in the Black Sea region, with 60% of respondents expressing their opposition.
Respondents from South East Anatolia also express the greatest support for economic, political and cultural rapprochement with Armenia; 62% of respondents support economic rapprochement, 60% support political rapprochement and 60% support cultural rapprochement. Respondents from South East Anatolia appear to support across the board reconciliation with Armenia, while those from other regions are more mixed in their attitudes.
Regarding attitudes towards European Union membership, 69% of respondents want Turkey to join while 26% are opposed to joining. The main reasons for supporting EU membership are the easing of visa restrictions and economic benefits. Worth noting is that respondents, by a large number, feel the greatest obstacle to EU membership is Europe’s Islamophobia. 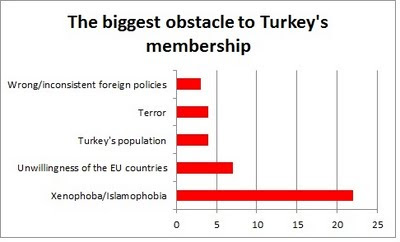 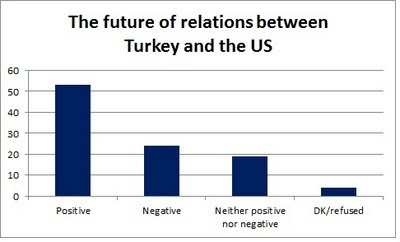 Turks have very strong opinions on foreign policy in the Middle East. Respondents feel that Israel is the greatest threat to peace and stability in the region (23%), followed by the US (12%) and terrorism (7%). Many Turks feel that Turkey could be a model for other countries in the Middle East, politically (72%), economically (80%) and culturally (82%). Three quarters of respondents support Turkey playing a role in solving the Israeli-Palestinian conflict. 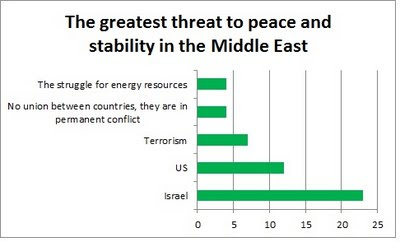