On February 6, 2012, Anastasia Baskina, current International Fellow at CRRC-Armenia, held a work-in-progress presentation on her research project “Syrian Armenians in Armenia: Pathways and Barriers to Integration”. The event aroused a vivid interest and attracted most relevant stakeholders currently working on Syrian Armenian refugee issues in Armenia, such as UNHCR, Ministry of Diaspora, UNISDR, as well as representatives from Syrian-Armenian diaspora, local NGOs, students, and media outlets. The CRRC office was filled to capacity and created a positive atmosphere to discuss this essential but still mostly uncovered issue.


The Armenian diaspora in Syria before the hostilities counted to be between 60 000 and 80 000 people, some of which fled to Armenia following the warfare. According to the official sources, currently there are about 6,500 Syrian immigrants of Armenian descent residing in Armenia. The main objective of Anastasia’s research was to identify major barriers to integration of Syrian Armenians in Armenia, as well to examine measures undertaken by the government, civil society and international organizations to address the issue. The study incorporated policy analysis and in-depth interviews with relevant stakeholders and Syrian Armenians, including life examples of troubles and difficulties faced. 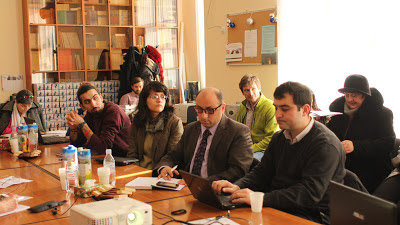 As the research is still in progress, and the topic is an unexplored land so far, Anastasia strongly encouraged the listeners to discuss and review the first findings. The audience used this excellent opportunity to interact and exchange experience and opinions concerning the results. Moreover, an assessment of stakeholders’ actions fired up a debate among the audience from all sides. Furthermore, certain concerns regarding relationship between Armenians and Syrian Armenians in Armenia, the role of the Apostolic church, aid distribution, as well as media coverage of the situation were also covered by the discussions. 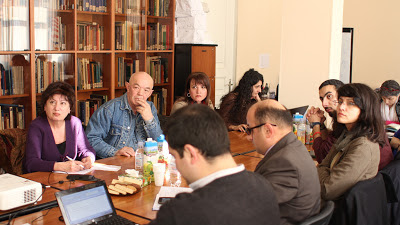 Eventually, CRRC was proud to conclude the event as probably for the first time the Syrian-Armenian community members and the stakeholders had a chance to face each other in a convenient environment to debate, interact, and exchange opinions across sore points and the big question about what an eventual “New Syria” will bring for the Syrian Armenian Diaspora, especially in the aftermath of the Arab spring in the Middle East. 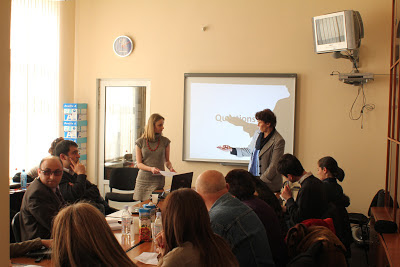 We are looking forward for Anastasia’s final results and the discussions which hopefully will follow up her upcoming publication!
Syrian Armenians in Armenia: Pathways and Barriers to Integration
Category Blog
Tags International Fellow research CRRC-Armenia presentation Diaspora