According to the Heritage Foundation, “Economic freedom is the fundamental right of every human to control his or her own labor and property. In an economically free society, individuals are free to work, produce, consume, and invest in any way they please, with that freedom both protected by the state and unconstrained by the state. In economically free societies, governments allow labor, capital and goods to move freely, and refrain from coercion or constraint of liberty beyond the extent necessary to protect and maintain liberty itself.”

While determining the economic freedom index, 10 factors are measured, namely,

Each of these factors is measured with the scale from 0 to 100, where 100 is the highest level of freedom. The overall economic freedom for the country is calculated based on the average score of the ten factors.

For measuring the Business Freedom, the data from World Banks “Doing Business” are studied. Trade Freedom measures the tariff rates. Fiscal Freedom is about the tax rates imposed by the government, mainly the tax rates on individual and corporate income and its ratio in GDP. Government Spending, as the term itself implies, is measuring the percentage of overall government spending as a ratio of GDP. Monetary Freedom, in the scope of Index of Economic Freedom, concerns the inflation and price control. Investment Freedom measures the easiness of investment flows in the given country. Financial Freedom takes into account the banking system efficiency and its independence from the government. Property Rights measure the ability of individuals to create and own private property. The score for the Freedom from Corruption is based on Transparency International’s Corruption Perceptions Index. And finally, Labor Freedom takes into consideration average wages, rigidity hours, difficulty of firing redundant employees, etc.

Among the Southern Caucasian countries, Georgia has the highest rank of economic freedom (70.4), Armenia has 69.7 points and Azerbaijan 59.7 points. Thus, all three countries are in different groups.

Armenia has not changed its scores in Investment Freedom, Financial Freedom, and Property Rights. There were some improvements in Trade Freedom (+5.0), Monetary Freedom (+3.1), and Labor Freedom (+5.3). According to the report, during the previous year labor market witnessed reforms that contributed to the flexibility and productivity growth. As a result, it has become easier to fire redundant employees. 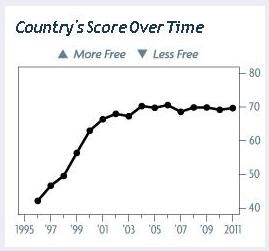 Azerbaijan’s rank has been gradually increasing since 2006 (53.2-59.7). Azerbaijan’s current rank (59.7) is equal to the world average and is higher than the regional average (57.4). Compared to previous year’s ranking, Azerbaijan has worse results for Business Freedom (-1.7), Government Spending (-6.5) and Labor Freedom (-1.4). The ranks for Trade Freedom, Investment Freedom, Financial Freedom, and Property Rights have not changed. However, Azerbaijan has improved its positions in Fiscal Freedom (+83.9), Monetary Freedom (+9.9), and Freedom from Corruption (+4.0).

Azerbaijan’s best score is for Fiscal Freedom (47th in the world): in 2010 individual income and corporate tax rates were lowered. Tax revenues constitute 17.7% of GDP. The worst rank is for Property Rights (146th in the world): it is the result of dependent and corrupted judicial system, according to the report. Azerbaijan has slightly improved its rank compared to the previous year (89.7 vs. 58.8). 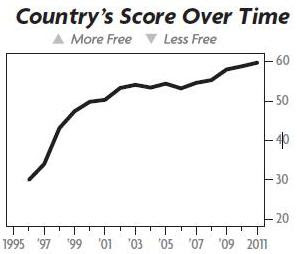 Finally Georgia, the only one among South Caucasus countries ranked as mostly free, has substantially improved its ranking since 2005 (from 57.1 to 70.4). Its ranking is higher than both the world and region averages (59.7 and 66.8 subsequently).

Nonetheless, Georgia has lower ranks compared to the previous year. Particularly, Business Freedom (-0.6), Fiscal Freedom (-1.6), Government Spending (-5.0), and Labor Freedom (-1.6). Concerning Investment Freedom, Financial Freedom, and Property Rights there has been no change compared to the previous year, according to the report. In Trade Freedom (+0.1), Monetary Freedom (+6.5), and Freedom from Corruption (+2.0) Georgia succeeded with improvements.

Though Georgia has lowered its rank for Labor Freedom, it is still Georgia’s best rank compared to 9 other factors. Moreover, Georgia is the 6th with Labor Freedom in the world, due to flexibility of labor migration and work hours. Georgia’s worst rank is on Property Rights (73rd in the world). The law on property right protections leaves some room for improvements.

Though Georgia is quite free compared to Armenia and Azerbaijan, nonetheless, as opposed to its other South Caucasian neighbors, it has made no improvements in its overall score compared to the previous year (70.4 points). 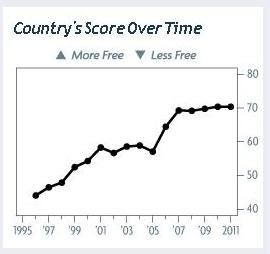 Already for a decade, the Heritage Foundation and the Wall Street Journal release annually the Index of Economic Freedom.

Having a closer look at the comparison of all three countries, the overall picture is the following: Georgia is the pioneer of economic freedom index. Armenia is somehow close to Georgia, but still weak though it has slightly better results compared to Georgia in Fiscal Freedom, and Investment Freedom, and substantially in Government Spending, and Financial Freedom. With the exception of Government Spending, and Labor Freedom Azerbaijan has worse results than its neighbors in all other cases.

The worst results compared to the world average, South Caucasus countries have for Property Rights and Freedom from Corruption. This is where all three countries have to push harder with improvements. 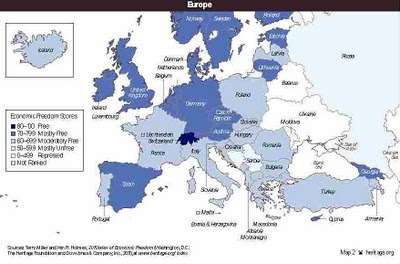 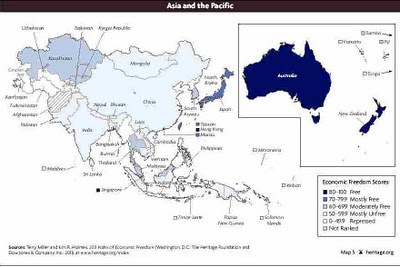 *In the scope of this report, Armenia and Georgia were included in the region of Europe and Azerbaijan in the region of Asia and the Pacific.
**All data and graphs are retrieved from The 2011 Index of Economic Freedom.
Category Blog
Tags Armenia Azerbaijan Georgia business freedom GDP