Date: August 10, 2011
This June 2011 marked the publication of the Life in Transition Survey II (LiTS II) (click link for full report) by the European Bank for Reconstruction and Development (EBRD) and the World Bank. Both institutions are international finance agencies which support market economies in developing countries. Armenia was one of twenty-nine countries to participate in this survey results of which were released soon before CRRC’s Caucasus Barometer (CB).
LiTS II builds on the initiative to gain insight into the lives of those in countries that continue to transition into market economies and democratic governments. Questions in LiTS II focus specifically on attitudes and values, governance and public service delivery, corruption and trust, and gender differences in social integration.
The first survey was held in 2006 when economic growth was more prevalent. The second installation of the survey happened to be conducted just after the global economic crisis, when countries were in recovery. This crucial difference of economic atmospheres may create starker differences within the data collected and compared between surveys. An entire portion within the survey is devoted to crisis impact and subsequent coping methods, in which Armenia was recorded as being “significantly” more affected than the average rate within the transition area.
The chart below was created from country assessment reports to take advantage of the opportunity provided by LiTS, which added five western European countries (France, Germany, Italy, Sweden, and the United Kingdom) for the second installation to encourage comparison. The chart places South Caucasus countries’ data next to that of the Western Europe country average within several different categories. In this set, LiTS recorded Armenia as having the highest rate of households affected by the global crisis, which corresponds with low percentage findings in the category of life satisfaction.
Interesting to note is that the LiTS II results were released not long before those of CRRC’s annual Caucasus Barometer 2010. The CB is a nationwide survey administered throughout the region, which captures social, political, and economic information. In the case of Armenian trust levels, both surveys used a scaling questionnaire to capture the participant level of trust for specific institutions. The chart below shows CB results stacked up against findings from LiTS. The institutions that harbored the most difference between results were those of police and religious institutions. 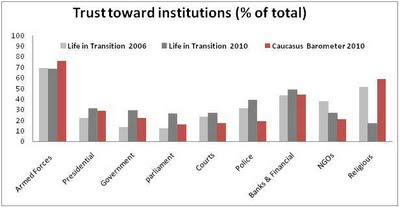 Both surveys allow for a deeper look into Armenian life. While the LiTS survey has a section dedicated to ‘gender differences in social integration’, the CB allows one to analyze data by age, gender, settlement type, etc. through the Online Data Analysis (ODA) tool (click for direct link). For example, when calculated (click for online calculation), one can see the percentage of female respondents of the total thirty percent (twenty-two percent in LiTS) that reported some to complete satisfaction with their lives. With these two tools at one’s disposal a better understanding Armenian life in transition can be achieved.
Prepared by Leslie Diaz
Category Blog
Tags Armenia survey Caucasus Barometer statistics EBRD caucasus DI