Migration in Armenia: Young and Ready to Work

Migration in Armenia: Young and Ready to Work

Date: November 8, 2012
Many Armenians are having difficulty finding work and are looking to migration as a way to increase their quality of life. Though there are differences in the demographic characteristics of migrants as well as many reasons for this migration, key trends have been found from this project that can help shape policies for Armenia’s future. Read on for a more in-depth look at CRRC’s recent project initiated and funded by ETF on migration and skills in Armenia.
CRRC– Armenia has recently released the findings of a survey on migration and skills. The project was initiated and funded by the European Training Foundation (ETF) and was part of a larger, multi country, set of similar surveys. The survey focused on the relationship between skills, migration and development in Armenia. Just over 2,600 potential migrants and 1,400 returned migrants were interviewed.  The project’s overall objective was to contribute to the improvement of evidence-based policies on migration, skills and employment by investigating the links between migration and skills and by supporting stakeholders in Armenia.
Over the last few weeks, CRRC – Armenia director, Dr. Heghine Manasyan, has presented the findings of this project to several different groups in the region. On October 16th, Dr. Manasyan presented; along with ETF expert, Arne Baumann; the results of the project within an international conference hosted by ETF called “Skills and Employment for Returning Migrants.” On October 30th, Dr. Manasyan gave a presentation at The World Bank office in Armenia as part of their brown bag lunch series and was encouraged to find the audience excited and asking many questions throughout the session.  Most recently, on November 2nd, she participated in a conference in Tbilisi, Georgia hosted by GIZ and was asked to report the main findings of the project in Armenia and Georgia to the audience.

Dr. Manasyan and other panelists at GIZ conference in Tbilisi
Some of the most interesting findings of the project are:
Who is considering migration?
The desire to migrate varies greatly depending on age, gender and education level. For men, those who are highly educated and those who just finished basic schooling are the most likely to consider migration (see graph below), while those who completed secondary school are the least likely. In general, women are less likely to consider migration, but this difference is especially stark among poorly educated women, who unlike their male counterparts show very little desire to migrate. The education characteristics of potential migrants show that while there are some highly educated people who want to leave, a brain drain is not the primary concern for Armenia. A more worrying trend for Armenian policy makers is that unlike migration from Armenia in the past, the current migrants are much younger. These younger migrants are much more likely to move permanently to the host country than older migrants, which will further add to the declining population in the country.
Propensity to migrate by educational level (%) 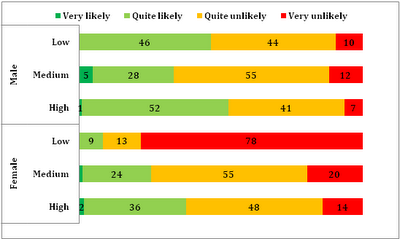 Destinations:
Russia was both the main destination for returned migrants as well as the most likely destination for potential migrants. Despite this similarity, a large difference is noted in the percentage of those who desire to go migrate to Russia and those who have returned from Russia (60.4% and 85.2%, respectively).  When compared to migration in Georgia, as shown below, migration in Armenia is much less diversified in terms of location. 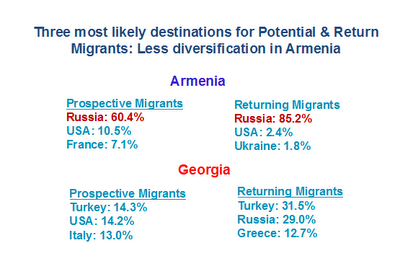 Skills and support:
The overwhelming majority (98%) of the returned migrants had done so without any prior training to prepare them for living or working abroad. Only around 1% attended language training. There were great differences in the responses when returned migrants were asked if their education and qualifications corresponded with their work abroad, though a basic trend can be found. Many (81.4%) of the poorly educated migrants said that their qualifications matched their work while the highly educated answered this way only 29.8% of the time. Obviously, the poorly educated have corresponding qualifications to low skill jobs and the combination of this matching and the lack of correspondence between work and qualifications for the highly educated indicate that many Armenians are working low skill jobs abroad. 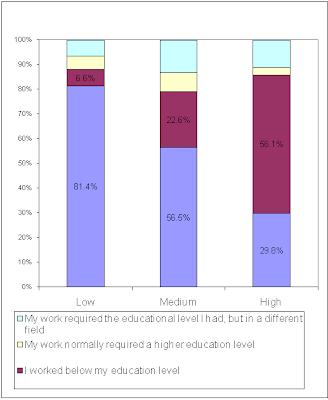 Returned migrants’ assessment:
Given the difficulties that many migrants face during their time abroad, it would not be shocking if they returned with negative feelings towards the experience. However, large-scale negativity was not found; 82% of returned migrants reported that their migration was successful while only slightly over 1% answered that their migration was either unsuccessful or extremely unsuccessful.
Migration Outcome Indicator (%) (n=1228) 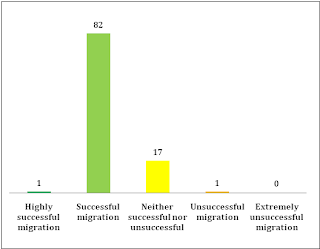 These responses show that even though there currently isn’t a great deal of support for them, the Armenian population continues working and feels that they are succeeding in creating better lives for them and their families.
Category Blog
Tags migration survey CRRC-Armenia ETF