Date: July 20, 2010
Caucasus Research Resource Centers (CRRC)-Armenia under the program of USAID Mobilizing Actions Against Corruption (MAAC) has conducted surveys throughout Armenia among households and private enterprises about Corruption in the Republic of Armenia. The surveys were conducted among 1515 randomly selected adult people (at the age of 18 and older) in October of 2009 and 400 private enterprises in January 2010.
The survey questionnaire circulated among households contained 80 questions about the general perception of corruption, the awareness of government actions against corruption, personal experience and other questions. The questionnaire circulated among private enterprises was created by MAAC and later on improved by CRRC-Armenia, in order to reflect the realities in the Republic of Armenia. Along with questions about the corruption perception, the questionnaire contained questions about business environment, additional bureaucratic costs, judicial system and the like.
Some of the main results of the survey are the following: 84% of households find corruption a serious problem in Armenia, while among the private enterprises 90% think so. 59% of households and 73% of private enterprises participating in the survey think that corruption is a “fact of life” in Armenia. Thus, the findings of the surveys show that the private enterprises are more concerned with the problem of corruption.
Moreover, most of the respondents think that the corruption can be reduced in Armenia only by few percents or not at all. Consequently, these findings show the lack of trust among the population of Armenia in fighting corruption.
This was the second survey about corruption conducted by CRRC-Armenia among households and the first one among private enterprises.
CRRC-Armenia has conducted series of public presentations to introduce the project results to the following audiences: NGO leaders, youth activists, academic community and other interested parties. The two most recent dissemination events were the presentation for the public officials and a press conference.
The presentation for public officials took place on 16th July 2010 in Golden Tulip Armenia. It was attended by 35 public officials from various ministries, marzpetarans and other governmental bodies. The survey results were presented by CRRC-Armenia Country Director Heghine Manasyan. The 30-minutes presentation was followed by a number of questions and a discussion about the survey methodology, the importance of such research and surveys, the potential of the Armenian public to combat corruption and the role of the government in fighting corruption.
The Press Conference was held on 20th July in Golden Tulip Armenia. The Press Conference was mainly attended by representatives of printed press and was followed by an active question and answer session by the interested audience. 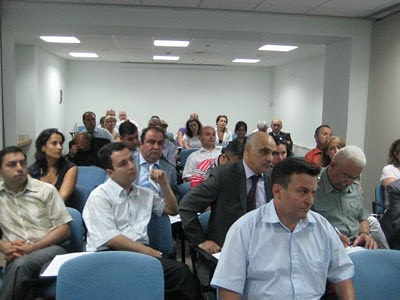 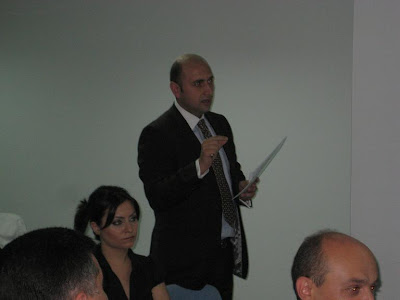 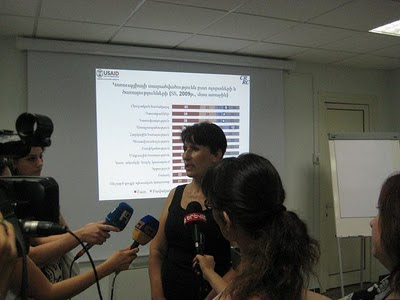