Prospects for the Global and Regional Economy: IMF Public Lecture

Prospects for the Global and Regional Economy: IMF Public Lecture

Date: December 28, 2013
By Valeria Sargsyan
On December 20, 2013 CRRC-Armenia in cooperation with the International Monetary Fund (IMF) Resident Representative Office in Armenia and the Yerevan State University (YSU) organized a public lecture on “Prospects for Global and Regional Economy”. The lecture, conducted by the IMF Resident Representative in Armenia Ms. Tereza Daban-Sanchez, was hosted by the YSU, and attracted students, bankers, auditors, researchers, and business people interested in economic developments and their effect on Armenia.

Overall, Ms. Sanchez presented the regular issue of IMF’s “Regional Economic Outlook: Middle East and Central Asia” Report. She began her presentation with a remark on relatively weak global growth, including China, Russia and other major emerging market economies, noting that global growth forecast is a subject to a number of risks, however, and mitigating these risks requires further policy efforts, mainly in the advanced economies. 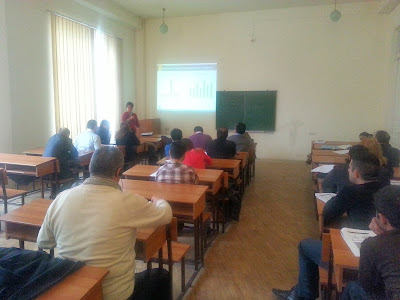 She further went on with a discussion about the Caucasus and Central Asia region as the one containing both oil and gas exporters and importers thus showing reasonably steady growth rate. This stability is reflecting in a recovery in hydrocarbon sector, strong commodity prices and a firm growth in domestic demand, supported by stable inflows of remittances. However, there are some risks stemming from slowdown in key emerging markets, tightening of global financial conditions, and weak domestic institutions and accountability paired with political uncertainty. As for policy response, further efforts are needed to rebuilt buffers, as well as more exchange rate flexibility and structural reforms to spur job creation and private investment are essential, she believes. 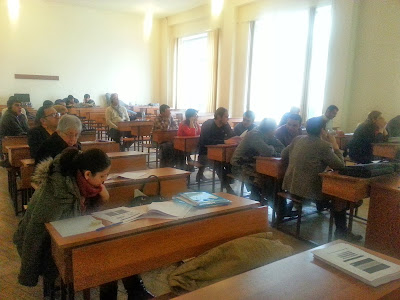 Ms. Sanchez concluded this part of the lecture with a summary of near term priorities for the Caucasus and Central Asian Region, for both oil and gas exporters (to preserve part of the oil and gas wealth for future generation and ensure that budgets are sustainable) and importers (to create fiscal space by reining in hard-to-reverse expenditures and by broadening tax bases, Increase exchange rate flexibility to lower the risk of output and price fluctuations).

Turning to Armenia, Ms. Sanchez presented an overview of Armenian economy, existing risks, policies, challenges and obstacles as related to the CCA emerging market vision, that is a higher, sustainable, less volatile, and more inclusive growth. “Achieving the vision will not be easy, and CCA countries face many challenges along the way,” she stated. The possible policy recommendations for external/global and domestic challenges for Armenia were made, including strengthening fiscal frameworks, fostering financial sector development, and focusing on structural reforms. 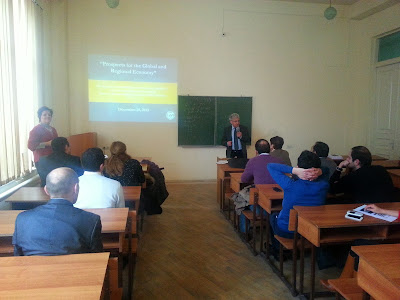 The lecture was followed by a lively discussion mainly focused at the awareness and information sources and availability, regarding existing economic situation and reforms run, as well as IMF’s role and place in Armenian economic policy.