Social Snapshot and Poverty in Armenia: Children are the Most Vulnerable

Social Snapshot and Poverty in Armenia: Children are the Most Vulnerable

Date: January 14, 2013
The National Statistical Service of the Republic of Armenia has recently published its annual statistical and analytical report “Social snapshot and poverty in Armenia”. The report is based on the results of the 2011 Integrated Living Conditions Survey (ILCS) of Households and intends to inform the public about the living conditions and social situation in Armenia. For researchers, students and any interested individual it provides the most comprehensive report and data set on social, economic and demographic issues in Armenia. According to ILCS estimations, the number of current population of Armenia is 2,927,600 people. The resident population comprises 48.6% males and 51.4% females, with an average age of 35.3 years.
The chapter on poverty profile and labor market situation presents detailed information on Armenia’s economic development in the period 2008-2011. Due to economic reforms implemented in the last decade before the global economic crisis, Armenia was able to join the group of middle economy countries. However, the Armenian economy underwent a deep recession in 2009 and real GDP dropped by 14.1%.A moderate recovery followed in 2010 and 2011, by 2.2% and 4.7%, respectively. The global economic crisis has also seriously undermined the government capacity to alleviate poverty. While the rich increased their wealth even further, the poor suffered the most and benefited less from the economic growth of the last two years.

In order to assess the level of well-being in Armenia, the report uses a consumption aggregate. Based on living standards, the population of Armenia is divided into poor and non-poor, with the poor further divided into poor, very poor and extremely poor.  In 2011 more than one third of population (35.0%) was poor, 19.9% was very poor, and 3.7% was extremely poor. A majority of the extremely poor are urban residents, which seems to suggest that subsistence agriculture plays an important role in safeguarding people from extreme poverty.  Overall, the real monthly consumption of the population as not recovered from the most recent recession and is 6.1% lower than it was in 2008. The report estimates that Armenia would need AMD 111.5 billion (or 3% of GDP) to overcome poverty, in addition to the resources already allocated to social assistance. 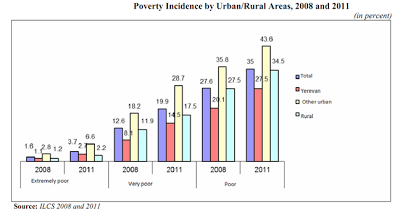 Child poverty remains a grave concern. Among all population groups, poverty incidence is highest among children, particularly in age groups of 0-5 years, 6-9 years, and 15-17 years, and lowest in the age group of 60-64 years. It is interesting to note, in contrast to old-age pensions and family benefits, child allowances do not make any significant difference to average child poverty rate,.The report estimates that without pension income the average extreme poverty rate would triple in the households with a relatively low consumption level.

As of 2011, 1.2 million people (out of 1.4 million economically active labor force) were employed, with 39% of them in the agricultural sector.The youth (15-29 years old) accounted for 21% of the employed and 42% of the unemployed population. It is estimated that half of the jobs (50.4%)are informal, which causes many problems for the social and financial situation in Armenia. Most significantly,the large share of informal economy undermines social protection and further economic growth in Armenia. On average, monthly earnings in 2011 equaled to AMD 74.408, which is 8.3% higher than in 2010. Men earn 1.6 times more than women.

The full report contains much more information on the economic and social situation in Armenia and contains interesting details for students and researchers alike. The full report can be found here, at the NSS website.
Category Blog
Tags Armenia poverty statistics NSS labor market