Date: June 15, 2009
On June 12, 2009, CRRC-Armenia Country Director, Heghine Manasyan chaired a regular session “Youth Transitions and the South Caucasus and other New Market Economies/Democracies” and presented a paper “Youth Transition: Employment Profile, Trends and Factors in South Caucasus” at the 39th World Congress of the International Institute of Sociology (Yerevan State University, Armenia, June 11-14). The paper is authored together with Armen Asatryan and Hovhannes Harutyunyan with EU INTAS Project “Youth transitions and their family-household contexts in the South Caucasus.”
Within the same session, Ken Roberts, School of Sociology and Social Policy, University of Liverpool, UK, explored the evolution of youth in eastern European countries, Central Asia and South Caucasus in the post-communism period. 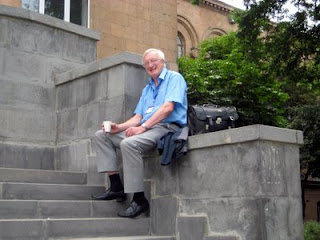 The theme of the Congress was “Sociology at the Crossroads” and it had regular, special and plenary sessions. The Congress also had three broad foci, namely questions concerning the way sociology can arrive at a reformulated understanding of dilemmas of humanity in the contemporary era, including the nature of war and violence, of political order and states and state-like entities, of religious and cultural encounters, of processes of collective memories, traumas and reconciliations, and of shifting conceptions of law, legal regulation, human rights and international order. The Congress also highlighted cutting-edge theoretical advances in sociology and neighboring disciplines as well as teaching and curricular developments of sociology and social science in general in universities in the future.

It was a delight and an honor that the current President of ISA, Michel Wieviorka, played an important role at the Congress as well as two former Presidents of ISA, namely Margaret Archer and Immanuel Wallerstein.
Category Blog
Tags presentation YSU caucasus transition