The South Caucasus population asks for a stronger European Union

The South Caucasus population asks for a stronger European Union

Date: July 27, 2010
The results of the CRRC’s 2008 Caucasus Barometer (CB) reveal that the population of South Caucasus (SC) is in favour of the EU taking on a stronger foreign policy stance. The SC is considered a region as a whole here, as EU policy towards the SC arguably tends to adopt a regional approach. However, it must be said that Azerbaijan is slightly less enthusiastic about the EU overall than Armenia and Georgia (usually 10 points fewer), which each have very similar results.
The EU does not seem to be perceived as a credible military power and the disagreement about the Iraq war among EU member states is still weakening the image of a united EU. Indeed, 88 percent of the respondents think that the EU should have a rapid military reaction force and 92 percent of them estimate that the EU should agree on a unified stance towards a conflict when an international crisis occurs. 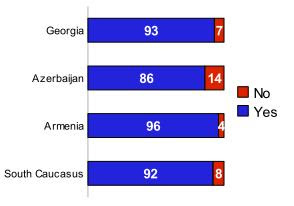 When an international crisis occurs, EU Member States should agree on a common position

The idea of a European common voice is furthermore promoted by 84 percent of the respondents who agree with the following statement: “the EU should have its own foreign minister who can be a spokesperson for a common EU position.”

The SC arguably supports an independent EU policy, as 87 percent of people are in favour of an EU seat at the UN Security Council. Surprisingly, 85 percent of the respondents consider that the EU should have an external policy independent of the US. This second statement seems staggering when most of the critics regarding the lack of the EU’s commitment in the post-Soviet countries evoke the fear of the EU to be “seen by Russia as a ‘geopolitical adversary’” (Halbach, “The EU fears being seen by Russia as a ‘geopolitical adversary’ in post-Soviet space”, Caucaz.com, 10 Sept. 2006). 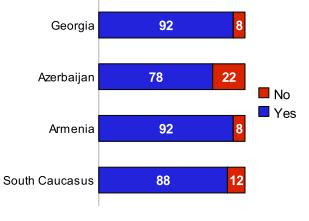 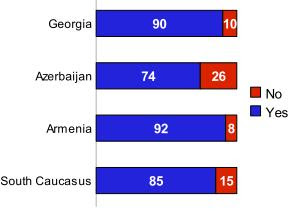 Generally speaking, the EU is seen as an ally rather than a threat by people in the SC. Indeed, according to the research done by the International Republican Institute in 2010 for Georgia and in 2008 for Armenia, 24 percent of the Georgians and 29 of the Armenians see the EU as a possible political or economic partners, compared with the 6 percent of Armenians and the 1 percent of Georgians who see the EU as the greatest political and economic threat. However, the EU might suffer to be seen as a weak ally compare to other international powers as Armenia still considers that Russia is its main partner in the region, Georgians ranks the US as their main partner and Azerbaijan historically sees Turkey as its first ally. 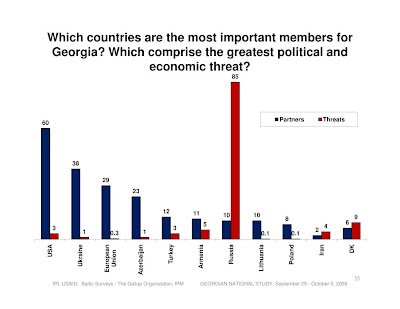 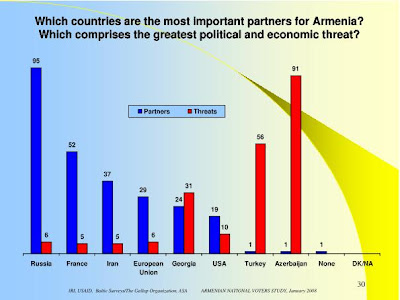 For all the information on the data, you can have a look at CRRC and IRI websites on http://crrccenters.org/sda/
http://www.iri.org/explore-our-resources/public-opinion-research/public-opinion-polls#three .
This post is also available on CRRC regional blog