Trust towards political institutions: variations from titular ethnicity to ethnic minority in Azerbaijan and Georgia

Trust towards political institutions: variations from titular ethnicity to ethnic minority in Azerbaijan and Georgia

Trust towards political institutions strengthens the legitimacy, stability and efficiency of any government. Distrust can be very helpful to encourage the government to work better, but at the same time distrust costs alienation and withdrawal from the political processes, as well as results in a fragile state that is unable to mobilize national resources or shape a collective vision for national development (Dimond, 2007). There is no consensus in scientific literature regarding the potential causes of trust. While, some scholars, attribute trust toward the institutions to cultural norms (Mishler, Rose,2001 ) others consider trust as an expected utility of institutions performing satisfactorily (Coleman, 1990; Dasgupta, 1988; Hetherington, 1998 as cited in Mishler, Rose, 2001).

Trust becomes more crucial for multi-ethnic countries that have the responsibility to protect the rights of ethnic minorities, including indigenous people. It can well be the case that in such countries ethnic minorities exhibit lower level of trust toward political institutions than the ethnic majority, as they may face problems of integration, can remain highly underrepresented in central and local government and administration as well as can be socially, economically and culturally marginalized. The aim of this blogpost is understand the level of trust ethnic minorities exhibit toward the political institutions in the two countries of the South Caucasus: Georgia and Azerbaijan. Armenia is excluded from the analysis as it is a mono-ethnic country, with the majority of the population being ethnic Armenians.

The fact that relatively large communities of ethnic minorities live compactly in Georgia and Azerbaijan allows us to compare a data of one administrative unit populated by ethnic minority with a similar unit populated by the title ethnicity. Particularly, in the case of Georgia the regions of Kvemo Kartli (45% of ethnic Azerbaijanis[1]) and Samtskhe-Javakheti (54.5 % of ethnic Armenians) will be compared to the region of Imereti (99% of ethnic Georgians). In the case of Azerbaijan the Economic administrative unit of Quba-Xaçmaz (with compact population of Lezgians) will be compared to Dağlıq Şirvan (majority of ethnic Azerbaijanis).

According to the Chart1 people in Kvemo Kartli expresses higher level of trust toward the president, the government and the parliament compared with Imereti and Samtskhe-Javakheti regions. In Kvemo Kartli 53% of population show trust, while 51% of Imereti population express their distrust for president (At the time of fieldwork (October 3-27, 2013) incumbent president in Georgia was Mikheil Saakashvili)[2], which opposes the suggested hypothesis. Moreover, “Do not know” is the answer of 20% and 17% of Kvemo Kartli population for the trust respectively toward the Parliament and the Government. At the same time, Chart 1 presents the fact that population of Samtskhe-Javakheti has the most accentuated indifference toward the political institutions, as the level of “neither trust nor distrust” for all three institutions is higher than it has been expressed by the people living in remaining two regions and the lowest level of “Distrust” among the Georgian regions.
Chart 2
The case of Azerbaijan also seems not support the suggested hypothesis as the population of Quba-Xaçmaz, populated by ethnic minorities expresses as much trust as that of Dağlıq Şirvan. Interestingly, the trust toward the president is very high in both regions. Particularly, in Dağlıq Şirvan 77% of the respondents trust the president, while in Quba-Xaçmaz only 60%.
The current analysis seems to be in conflict with the reports on Azerbaijan that suggest minority right protection problems and harassment. However, it can also be the case that the respondents are unwilling to answer to the questions sincerely as the freedom of speech is heavily constrained in Azerbaijan.
In sum, the blogpost fails to find a relationship between being an ethnic minority and expressing distrust toward political institutions in the two republics of the South Caucasus: Georgia and Azerbaijan. 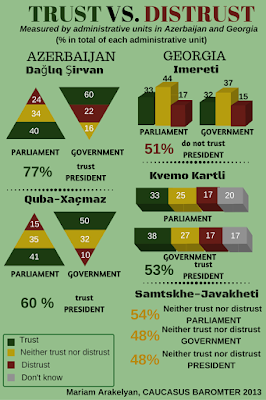 [1] Please note that Caucasus Barometer survey is representative for countries but is not representative for administrative units, therefore results are made with reservation.. Trust toward the President, toward the Parliament and toward the Government is the main variables under scrutiny. Respondents were asked following question “Please assess your level of trust toward each of the political and social institutions on a 5-point scale, where ‘1’ means “Fully distrust”, and ‘5’ means “Fully trust”.

[2] Data of National Statistical Service of Georgia (2002), which during last decade showed increasing tendency
[3] Fieldwork took place during the pre-election campaign (Presidential elections were held on October 27, 2013) in Georgia. Hence, the respondents were exposed to intense political coverage. However, compared with previous pre-election periods in Georgia, the 2013 pre-election period cannot be described as tense and highly politicized.
Category Blog