As the most ethnically homogenous state of the Former Soviet Union and the first to accept Christianity as a state religion, the place of the country’s few ethnoreligious minorities in modern Armenia is a complex one.  Armenia’s 2011 census recorded 98.1% of the country’s population as ethnically Armenian, with past censuses showing a trend towards ethnic homogenisation (the 1926 census of Soviet Armenia registered ethnic Armenians at 84.5%, and their percentage has been steadily increasing ever since). Armenia’s largest ethnic minorities are at present Yazidis and Russians (35,272 and 11,862 respectively), with Kurds at 2,131 and Assyrians at 2,769. My research at CRRC-Armenia concerns the Jewish, Assyrian, and Yazidi communities, and my primary focus thus far has been on Armenia’s Assyrian community. Armenia’s Assyrians are largely the descendants of Assyrians from the Urmia region of North-Western Iran who arrived in Armenia at the invitation of the Tsarist government following the Treaty of Turkmenchai in 1828. There are now four Assyrian settlements in Armenia – the villages of Dimitrov and Verin Dvin in Ararat Marz, Nor Atages in Armavir мarz, and Arzni in Kotayk мarz. Historically these settlements’ populations were majority Assyrian, though given the impact of emigration on rural communities throughout Armenia, many younger Assyrians have now left to work in Russia, particularly in Rostov and Krasnodar Krai (the location of Russia’s only Assyrian village, Urmia).

Researching Armenia’s Assyrian community is of interest for a number of reasons. Given my interest in the nationalities policy of the Soviet Union, the story of Assyrians in the USSR can tell us a great deal about how the Soviet Union related to diaspora ethnic groups, and also provides an interesting insight into the politics of genocide recognition. Whilst many Armenians and Assyrians perceive the genocides in the last years of the Ottoman Empire and beginning of the Young Turk regime as part of the same historical process, Armenia has not yet officially recognised the Assyrian and Greek Genocides. A monument to the Assyrian Genocide was built up in Yerevan in 2012, yet that same year the Armenian Parliament did not accept a bill calling for that same genocide’s recognition. Nevertheless, Armenians and Assyrians enjoy excellent relations – mixed Armenian-Assyrian marriages are fairly common, and Armenians and Yazidis who live in majority Assyrian communities often have some knowledge of Assyrian. 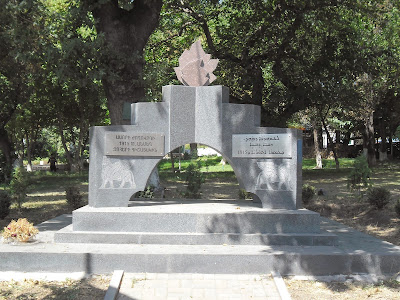 Yerevan’s Assyrian Genocide memorial on Nalbandyan Street, built up in 2012.
As stipulated in the terms of their settlement in Armenia, Armenia’s Assyrians accepted Russian Orthodoxy in the 19th century and consequently were exposed to Russian-language education earlier than many Armenians in the same villages, a fact which one interviewee described as a particular advantage to Assyrians emigrating to Russia. Dimitrov’s Russian Orthodox Church is still maintained by the Assyrian community, whilst churches in Arzni and Verin Dvin now follow the rite of the Assyrian Church of the East, as practiced by Assyrians in Urmia to this day. A particular focus of my research is related to the effect of the demographic crisis in Armenia on the country’s ethnic minorities. Given that the majority of Yаzidis and Assyrians inhabit rural settlements which see a higher rate of emigration than Armenia’s cities and large towns, it is entirely probable – as past census results illustrate – that the decline in Armenia’s population will also see Armenia becoming even more ethnically homogenous, impacting the Assyrian community as a result. This trend is, it must be stressed, the result of the poor economic situation in all rural localities of Armenia, regardless of their ethnic composition.  My research methodology involves taking interviews with residents of all four named Assyrian villages as well as Assyrians in Yerevan and the small village of Gelasor in the Khosrov National Park, one of the earliest Assyrian settlements in the country but now nearly entirely abandoned. My series of articles will, I hope, shed some light on the many questions facing the Assyrian community in Armenia  – genocide recognition, religious affiliation and emigration, and their close relationship with Armenians.
Category Blog
Tags International Fellow research Assyria