Women in Armenian Society: Adding CRRC Data to the Discussion

Women in Armenian Society: Adding CRRC Data to the Discussion

Date: March 11, 2013
By Gabriel Armas-Cardona
Jim Yong Kim, the President of the World Bank Group, recently made a call for improving the lives of women all around the world. He said that one of the ways the World Bank is helping is by “collecting better data that measure equality for women and girls.”
Caucuses Research Resource Center (CRRC) recently conducted two significant surveys. The first is the latest iteration of the flagship Caucasus Barometer, which is an extensive annual survey in all three Caucasian countries. The second survey is the Armenian portion of the latest wave of the World Values Survey. These two surveys give us recent information about the status and perception of women and their rights.
This will be the first post of a series on the subject, and thus we’re going to start broadly examining the situation of women. Other people have begun to study this issue. Katy Pearce, who has worked with CRRC and the Caucasus Barometer data for a long time, has a post that covers the work satisfaction felt by women in the Caucasus.
From International Women’s Day until Motherhood and Beauty Day on April 7th is women’s month in Armenia. As all Armenian women deserve happiness, we suggest a preliminary look at the picture of happiness and satisfaction by gender. The graph below evidences some growth of happiness in Armenia, especially for women during the last three years.

Women also report slightly more overall life satisfaction than men, even if the level of satisfaction is only at the middle part of the graph. 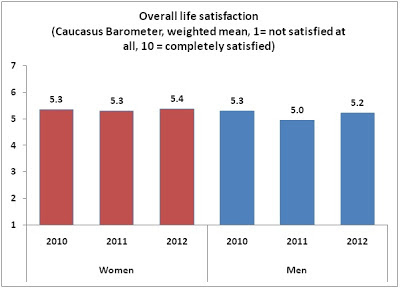 Delving further into what other factors may make women more or less happy or satisfied finds differences in age, marital status and education level. The charts for life satisfaction look similar to the charts for happiness, so only the happiness charts will be reviewed below.
Age 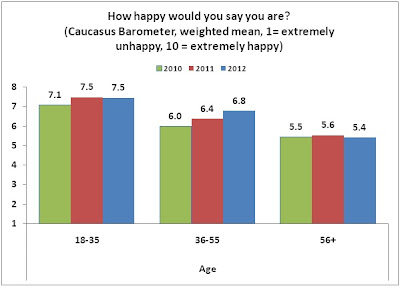 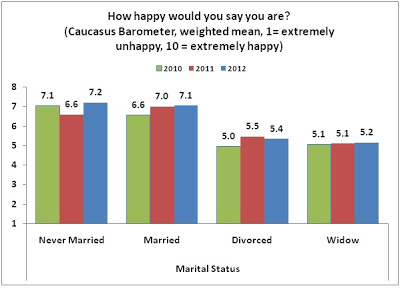 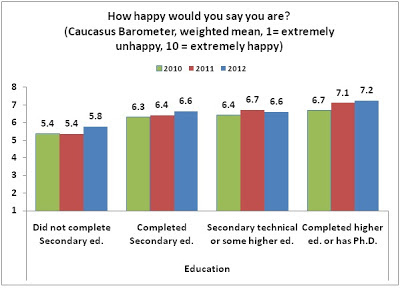 For both happiness and life satisfaction, women that were 18-35 years old, either never married or currently married, or completed higher education or held a Ph.D. tended to score higher than other women. From 2011 to 2012, women that were 36-55 years old, never married, or hadn’t completed secondary education showed the most significant improvements in happiness and life satisfaction. No difference was found in happiness between women based on settlement type (capital, urban or rural), and only a small difference in life satisfaction with women in the capital being more satisfied than urban or rural women.
Even without knowing if there are causative factors, recommendations can be made based on the strong correlations presented. The first is for women to obtain the highest amount of education possible; education lasts a lifetime and is well correlated to higher levels of happiness and satisfaction. The second is for women to be willing to delay getting married until they really want to; unmarried adult women report only a tiny amount more happiness compared to married women but significantly more life satisfaction.
Happiness and overall life satisfaction cover only the broadest aspects of women’s lives in Armenia. Yet, these two subjective scores demonstrate that women overall feel that their lot is improving, even if only a little bit. There are many challenges Armenian women face, including lack of economic opportunities, gender-based violence, expectations for boys and girls, etc. These challenges will be developed in future blog posts.