An article recently published on Media.am revealed that the internet penetration rate in Armenia in 2013, according to the country’s Public Services Regulatory Commission (PSRC), was 45%. How does this compare with data from the Caucasus Barometer?
According to the 2013 Caucasus Barometer, 59% of respondents said their household had internet access. The official government figure is different from not only the CB data, but also the rate provided by the International Telecommunication Union (ITU), a UN agency responsible for ICTs. According to the ITU, 46% of individuals used the internet in Armenia in 2013.
The ITU gets its data from “administrative sources” — mainly telecommunications operators and internet service providers collected by national regulatory authorities and ministries. As per the ITU’s Handbook for the collection of administrative data on telecommunications/ICT: “In most countries, the national telecommunication regulatory authority (NRA) is responsible for collecting, compiling and disseminating statistics covering the telecommunication/ICT services sector.” In Armenia, the ITU has traditionally relied on data provided by the National Statistical Service, the Ministry of Transport and Communication, and the PSRC, government bodies that technology scholars and experts are not inclined to trust as data collection processes have been neither transparent nor objective.
Furthermore, “some governments have reason to inflate penetration rates and there are few checks on this by the ITU,” writes Assistant Professor of Communication at the University of Washington and South Caucasus technology media expert Katy Pearce in this article from 2012.
There is, however, other data apart from household internet access that might help to provide a more comprehensive picture of internet access in Armenia. For instance, according to the 2013 Caucasus Barometer, 62% of households have a personal computer and 28% access the internet from a cell phone. Though having a computer at home doesn’t mean it’s connected to the internet, there’s a good chance that at least some of those computers are connected to the internet. Furthermore, recent studies have shown that internet penetration increased in Armenia primarily due to mobile internet access. Many Armenian internet users, in fact, access the internet only via mobile device (Pearce and Rice, 2013). All things we need to keep in mind when trying to determine the level of internet access in Armenia.
Another, perhaps more useful indicator is frequency of internet use.

Additional data can be found by looking at the findings of another nationwide household survey conducted by CRRC-Armenia in 2013, the Alternative Resources in Media survey. Here too, respondents were asked about device ownership, and internet use and frequency. Specifically, 47% of respondents said they used the internet in the last 12 months, with 48% of them reporting they used it daily. Asked about device ownership, 24% of respondents said they had a notebook, 6% had a netbook, 42% had a desktop computer, and 4% had a tablet.
The Alternative Resources in Media survey also asked about frequency of internet use (with slight variation in the response options): 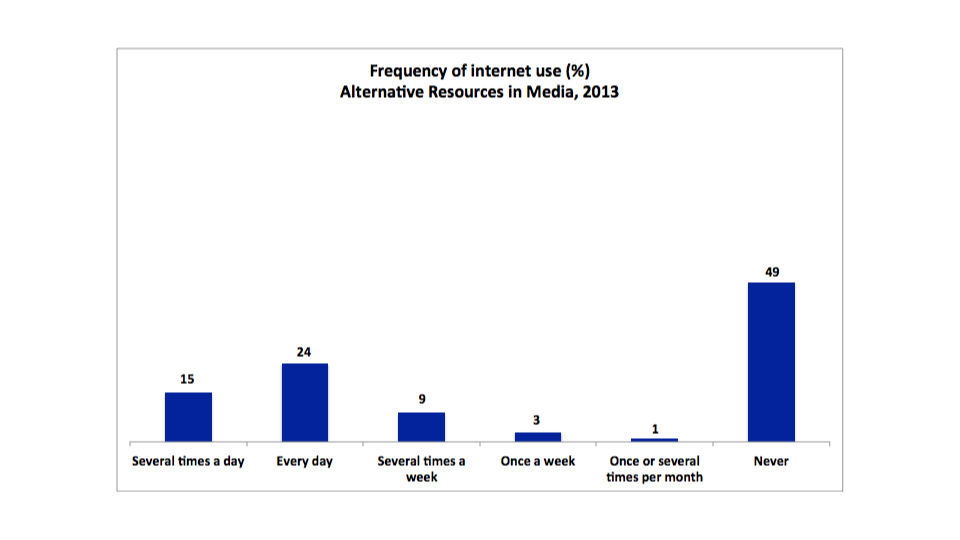 No matter how you look at it, the claim that 45% of Armenia’s population are internet users is simplistic and not wholly accurate. Besides, internet penetration rates on their own mean nothing if we also don’t look at internet frequency and online activities. Device ownership is also helpful but not the best measure of individuals using the internet.
Why aren’t devices a good way to measure internet use? Well, for one thing, individuals have multiple devices, and for another, they sometimes share devices (say, a household computer that several people use). LIRNEasia, an ICT policy and regulation think tank covering the Asia Pacific, proposes a new model that estimates the proportion of individuals using the internet based on income and education level data, particularly in cases where there is no survey data. LIRNEasia refers to previous research that found the main factors driving internet penetration are income and education. This paper points to the problems of relying on ITU data and number of internet subscriptions.
A good measure of internet use is the activities people do online. The 2013 Caucasus Barometer asked respondents which activities they do most frequently when they’re browsing the internet. To find the answer to this question and compare results from Armenia with those of the rest of the South Caucasus, go to http://caucasusbarometer.org/en/ and use the CRRC’s easy-to-use Online Data Analysis tool.
Category Blog
Tags Caucasus Barometer Junior Fellows media ODA