Motherhood and Beauty Day: a Moment to Focus on the Wives of Migrants

Motherhood and Beauty Day: a Moment to Focus on the Wives of Migrants

Date: April 8, 2013
Motherhood and Beauty Day, April 7th, is the last day of “Women’s month” in Armenia. For this day, CRRC wants to draw attention to the fates of wives that stay in Armenia while their husbands migrate for work. Migration is a large issue in Armenia, as every year tens of thousands of men temporarily leave Armenia for employment purposes. This months-long separation creates significant challenges for families remaining in Armenia and introduces new risks to the family, including STI and HIV risks.
CRRC-Armenia recentlycompleted a study on labor migration and the risks of HIV and other STIs in Armenia. This study was done in partnership with Mission East – Armenia and with financial support from The Global Global Fund to fight AIDS, TB and Malaria. Technical assistance was provided by the National Center for AIDS Prevention and the Medical Scientific Center of dermatology and STI in Yerevan.
The aim of this study is to examine STI/HIV risks among labor migrants and their marital partners, to assess current HIV prevention activities among this population, and provide recommendations. STI/HIV is primarily entering Armenia through migrant workers from post-soviet states, especially Russia,and heterosexual intercourse is the main form of HIV transmission in Armenia (National Strategic Plan on HIV & AIDS, RA, 2012-2016). These two factors make the wives of migrants particularly vulnerable to infection.
Many Armenian wives have extreme faith in the fidelity of their husbands. This faith can cause a decrease in interest in STIs as many women don’t think they’ll become infected. As one woman from Lori said, “My husband told me that I am the only woman in his life and that is why I am not interested in information on STIs.”

Migrant wives still predominantly believe their husbands will be faithful (68%), but are more likely to recognize the possibility of infidelity. One woman from Tavush said, “I understand that sometimes married men can be engaged in illicit sexual relations. … Due to their nature, men are engaged in such relationships when they work hard away from the family. This is necessary for men’s health.” With this recognition, comes more interest in reducing the health risks of STIs and HIV. Wives of migrants are more likely to have spoken to their husbands about STIs within the past year than the wives of non-migrants. 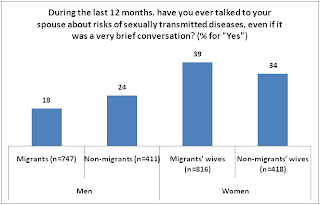 To combat some of the underlying issues that led to migration, especially irregular migration, the EU Mission, UNICEF, and the Ministry of Labor and Social Affairs and Territorial Administration Ministry have initiated a three-year one-million euro program on “Social Response to Labour Migration in Armenia”. The program focuses on mitigating the social consequences of labor migration in four marz in Armenia.
As more studies are conducted and information directed to this issue, the more Armenian women will become informed and better able to protect their health and the health of their husbands and kids. The CRRC-Armenia team is happy to be a part of this progress. In one interview, a woman from Lori said “I regularly talk about STIs, HIV/AIDS with my husband. Last time it happened was after a quantitative survey conducted by your organization.”
Category Blog
Tags migration gender CRRC-Armenia data analysis statistics labor market