On November 20, 2012 CRRC-Armenia, in cooperation with the International Monetary Fund (IMF) Resident Representative Office in Armenia and the Department of Economics of the Yerevan State University, organized a public lecture on “Global, regional developments and their impact on Armenia”. The lecture was conducted by Mr. Guillermo Tolosa, the IMF Resident Representative in Armenia, and attracted students, researchers and business people interested in global economic developments and their effect on Armenia.

The IMF Resident Representative presented the recently issued IMF’s World Economic Outlook and Regional Economic Outlook. Mr. Tolosa began his lecture by reviewing major economic developments and key risks to global growth. Specifically, he highlighted the fact that global manufacturing continues to contract and world trade growth has come to a halt. As a result, the IMF’s global economic outlook has worsened. In addition, the protracted euro zone crisis, the “fiscal cliff” negotiations in the USA and rising global food prices have added to the challenges of emerging and developing economies.

Turning to the Caucasus and Central Asia (CCA) region, Mr. Tolosa noted that despite worsening global economic conditions, the growth outlook in the CCA was generally positive. In the oil and gas importing states -Armenia, Georgia, the Kyrgyz Republic, and Tajikistan – overall growth is projected to strengthen next year. Growth in these countries is helped by two key factors: robust remittances from Russia and high commodity prices (e.g. metals, cotton).

However, significant risks remain, including: possible deterioration of the economic situation in Russia and its adverse effect on the CCA region due to their interconnectedness, a significant decrease in global commodity prices and trade volume, and/or a drop in financial flows. Volatile food prices also pose a major threat because of both inflation and the growth of current account balances. Global food prices are especially important for Armenia because, like Georgia and the Kyrgyz Republic, it is a large food importer. In addition, food constitutes a considerable share of people’s consumption baskets in these countries (over 45% in Armenia), which means that any increase in global food prices will seriously restrict the overall purchasing power of much of the population.

The informal sector in all CCA economies is another factor undermining social protection and further economic growth. The IMF’s empirical estimates show that the informal economy in Armenia accounts for more than 35% of officially measured GDP. 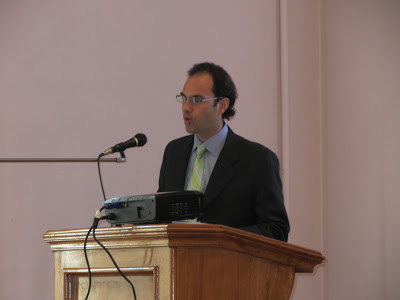 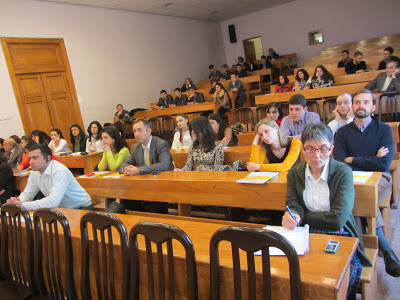 The lecture was followed by a lively discussion and provoked many questions, mainly from the international economic relations students in attendance. The audience was particularly keen to know more about similarities and differences in economic development of the South Caucasus states. Mr. Tolosa, not speaking for the IMF at this point, highlighted Georgia, the group’s most robust and diversified economy. Fueled by reforms, strong investment and healthy activity in the services and manufacturing sectors, Georgia’s economy is expected to continue to perform strongly. Nevertheless, Mr.Tolosa expressed that he felt there was great growth potential for the Armenian economy, especially in the tourism sector.One specific policy he mentioned was removing the current restrictions on budget airlines in order to increase the air traffic between Europe and Armenia and open the skies for businesses and tourists alike.